As a flurry of games were on the slate to begin the NBA season on Christmas Day, ‘Twas the night before Christmas, and all through the city, die-hard, cheery fans were excited and the streets were quite festive near Staples Center – the house that Kobe built. 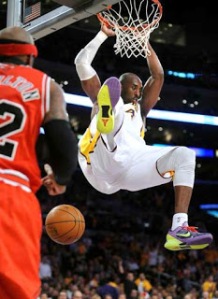 The lights were bright in the building for the city’s regularly scheduled program, and the Kobe Lakeshow absorbed much publicity because of a torn ligament in Kobe Bryant’s right wrist that would require the star guard to undergo surgery, but he opted to play through the injury. The fans awaited the season opener, though the Los Angeles Lakers were hit by misfortunes.

The truth is, however, the Lakers need an instrumental piece. Primarily because the Lakers are on a mission to contend for another title, and yet again raise another championship banner to the rafters at Staples Center.

Considering that the Lakers are a long ways from returning to prominence without a reliable star that could fittingly play alongside Bryant, only validates what direction the franchise is headed.

But here’s hoping the Lakers aren’t in ruins, especially when dumbfounded Jim Buss, the man responsible for dismantling a championship-caliber team, says the Lakers have the pieces to be crowned world champions – without trading for Dwight Howard or after sending Lamar Odom to the Dallas Mavericks in exchange for nothing and a trade exception from a dizzying turning point of recent events.

Known as the Slam Dunk King early in his career, one of the most decorated players of his generation, Bryant is definitely the star of the Lakers as the burdens lie heavily on his shoulders.

The fact is, it seems he and his team are getting older, slower and more sluggish, incapable of playing a full 48 minutes without showing signs of tiredness in the first game of a shortened 66-game season.

So what we have is a pro basketball franchise harder to understand than a jigsaw puzzle, equivalent to the mystic of connecting dots on dot-to-dot puzzles, the team of all riddles that have the Lakers in much uncertainty.

If I were the Buss family about now, I’d be proposing a deal that sends Pau Gasol and Andrew Bynum to Orlando in exchange for Howard. The expiration date for the Lakers’ triumphant days are on the verge of a gloomy ending to what was a glamorous Hollywood script. But now the Lakers are a melting mess, all while they are close to returning to playoff form if they acquire a fixture and get rid of soft and feeble players.

As he settled for 28 points, despite his eight turnovers from his poor ball-handling — in a grueling, nail-biting, tight, heartbreaking 88-87 loss to the Chicago Bulls – Bryant’s scoring masterpiece wasn’t enough. The game never had a dull moment, and Bryant never slowed down.

Not once in the game did he grimace in pain, not once was he weary. As seen so often, watching the Kobe Lakeshow under the bright lights in Hollywood, the Lakers heard swish after swish, and Bryant was the hottest shooter on the floor.

For Bryant, a five-time world champion, a future Hall of Famer, he drove right, drew three defenders and had his shot blocked by Luol Deng. The ending was so heart-shattering, so gut-wrenching that the game’s best closer boldly attacked the rim and tried to finish on a game-winning layup.

But while he was double teamed near mid-court after an inbounds pass and after trying to distribute the ball, generally a play the Lakers execute brilliantly, Deng was pesky and stepped in the way of an errant pass.

It was a pass intended for Gasol, a play created to score easily in the paint, but Deng stole the ball and delivered it to Derrick Rose that set up the game winner.

The moment finally arrived that Rose drove the lane and heaved a floating shot, scoring 22 points and helping the Bulls rally from an 11-point deficit late in the fourth quarter.

The reality is, after losing in the closing minutes and blowing a lead, the Lakers have no fighting chance, committing costly mistakes and missing half of their jump shots. The fact that Kobe is surrounded by players with many personalities plays a critical role as well.

Looking more like a confused nut — especially if you change your birth name to some peculiar name – Metta World Peace has a few marbles missing in his brain cells, he can’t shoot the ball effectively and is expendable for the $22 million price tag remaining on his deal over the next three years. It’s time, it really is, that we come to our senses and understand that Gasol is soft, maybe even the softest player in the league.

For the presence of Steve Blake, he has bricked more threes than he has made them. Matt Barnes doesn’t have that firepower or mental toughness he once had when he played in Orlando. Where it stands with Derek Fisher is that he’s not quick enough to keep pace with the younger and speedy legs as an aging point guard. Without Odom, the Lakers are weaker, missing arguably the best sixth man in the NBA.

At the age 33, Bryant is still the Lakers superstar, as painful as it is to perform efficiently with an injured right wrist. But the Lakers gave away a game they could have won, losing to the vintage Bulls. The Lakers, wearing their Sunday white jerseys and playing in front of a national audience, squandered an opportunity to prevail on center stage and appease L.A. sports fans.

The dreaded lockout is over, at last, and folks in town witnessed the No. 1 pro franchise in Los Angeles. This was supposed to be the prefect Christmas gift, but more than anything it was a heartbreaker. It was as if Mr. Grinch had stolen Christmas from the Lakers, as if Old St. Nick had marked them on his naughty list and as if you were reading a Charles Dickens tale.

It’s quite easy to figure out where the Lakers stand at this point, blowing an 11-point lead that eclipsed new head coach Mike Brown’s debut and crushed the team’s momentum. Among all things, the Lakers would miss free throws, commit clumsy turnovers and fouls with a few blown defensive assignments.

After all, it was never pretty. The Lakers never played well. They played much like no one expected, because of all their disadvantages on a Sunday afternoon at home.

What a stunning turn of events at Staples Center, where a disillusioned sellout crowd left early. If the Lakers had handled business by reconfiguring a deal for Chris Paul, after the deal was hopeful two weeks ago that they had agreed to send Gasol to Houston and Odom to New Orleans in exchange for Paul until NBA commissioner David Stern vetoed the deal, Paul would have joined forces with Kobe and maybe even Howard to keep the franchise on top in the future.

Their flirtation with Paul was the talk of the town, and now everyone is chatting about the final seconds of the first game that the Lakers gave away, after solely relying on Bryant and turning complacent and lackadaisical in critical moments.

The best player of this generation, if not on the planet – held the ball to take the final shot and clinch the game-winner, but he was shut down, trapped and smothered tightly.

The growth of the kids Devin Ebanks and Andrew Goudelock was impressive, a pair of young players shooting a combined six for eight. The inside presence of Josh McRoberts and Troy Murphy was astonishing, two new players combining for 16 rebounds and three blocked shots.

But late in the game, as they were weary and lazy, the Lakers unraveled and lost touch. And then, Gasol and McRoberts each missed two free throws as the Bulls scored to cut the deficit to one.

If the Christmas Day opener told us something, it told us that the Lakers need to address any team flaws. It all starts by making one more move, which would be a trade for a quality star.