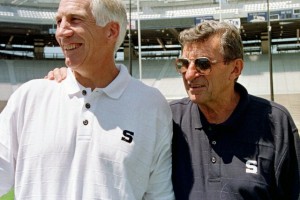 Shame on Joe Paterno for lying, for covering up the truth and for concealing the evidence. Shame on him for allowing a pedophile to lurk on Penn State’s campus, for ignoring the victims and for failing to protect against a sex predator, a hideous monster by the name of Jerry Sandusky, who was found guilty on 45 of 48 counts of child sexual molestation of young boys over a 15-year period.

The damning report was released Thursday by former FBI director Louis Freeh, who was hired to investigate the university’s involvement with Sandusky’s sex scandal. After the report was released, the true colors of JoePa were better understood, the facts came to light and the truth was that he knew about Sandusky’s sexual conduct with young boys and allowed it to escalate into an ugly sex scandal. The 267-page Freeh report unveiled the truth and found Paterno GUILTY, yes, guilty for lying to a grand jury, failing to alert the school’s board of trustees. He has damaged his legacy, the university’s reputation, and more importantly, the victims of sexual abuse.

Paterno spit in the faces of those victims. Paterno cared more about his own legacy and a once prestigious football program, which may never recover from a sickened and disgusting scandal, the worst in the history of college sports. Paterno lived a lie to save his ass, and selfishly never thought about the children who were victimized by a sexual predator. And he did nothing about it. He did nothing to stop it. He showed callous disregard toward the victims by not reporting it and allowing a child molester to get a thrill of seducing and sexually abusing young boys because of his silence and authority over a shamed Penn State football program. If he knew of Sandusky’s child abuse back in 1998, then Paterno committed perjury by lying before a grand jury and failed to take action to stop his longtime assistant.

This never left the Penn State campus and four men secretly remained silent, and never reported a serious crime to the authorities. And the truth, as details came into view from documents and interviews, revealed four men who shielded Sandusky and it generated more bad karma. The four involved were Paterno, Graham B. Spanier, Tim Curley, and Gary Schultz — and they should all be held accountable for their roles in a cover up. For whatever reason, Spanier, who was forced out of his presidency and stepped down in the wake of manifold allegations of sexual abuse against Sandusky, is still a professor at Penn State, which I don’t understand. Curley and Schultz face criminal charges for alleged perjury, for failing to report and for neglecting suspected child abuse, which I do understand. Nearly seven months ago, Paterno was fired for enabling a sex crime that continued and for not stopping a convicted child molester, and shortly after he died, as few believe, he lost his will to live. He failed the victims, himself, the university, the school’s trustees, which I don’t understand when he could have simply told the truth and nothing but the truth to help protect the victims, Penn State and his name in its entirety.

“Our most saddening and sobering finding is the total disregard for the safety and welfare of Sandusky’s child victims by the most senior leaders at Penn State. The most powerful men at Penn State failed to take any steps for 14 years to protect the children who Sandusky victimized,” said Freeh in a prepared statement about the investigation.

The details in the Freeh’s vitriolic report stemmed from 430 interviews and more than 3.5 million emails and other documents. And according to the report, stunned by the developing news that disgusted and outraged the normal human being, a janitor discovered Sandusky molesting a young boy in the Lasch Building in 2000. He said Sandusky pinned the boy against the wall and performed oral sex on him in the team’s showers. When the janitor saw the sexual involvement between him and the boy, he told his co-workers but they ignored him and none of them reported it to the police, according to the reports.

That said, nobody took accountability for kids who were in distress because of a sick, twisted and disgusting criminal. And this could have been prevented, certainly. It amazes me how much power Paterno had after coaching more than five decades at Penn State, a moral compass at the university, a legend and iconic head football coach in Happy Valley, known as JoePa before his dismissal. He chose to not contact authorities and to not turn in his good friend Sandusky. He chose to not do more for the sake of defenseless children and enabled Sandusky to manipulate young boys for power over weaker and younger people who normally are afraid to notify their parents or another adult of sexual abuse. For Sandusky, it was about having power. For Paterno, it was about protecting the school’s brand and his own legacy.

The Freeh report told it all publicly, and we now have a different outlook on a deceased Paterno, as a spotless reputation and image are tarnished. The more power he was given to control his program, the more he mismanaged it and couldn’t take responsibility in his role, condoning the terror of sexual abuse to lower standards and tearing down a defunct university and allowing Sandusky to get away with his repugnant crime. It’s unfortunate he couldn’t be thrown behind bars much sooner than this. It’s really stunning, of all people, to learn that Paterno stood by his friend and not the victims of sexual abuse. The rest of us should be irate and furious.

This is disgusting, repulsive, despicable and a damn shame. No way, just no way in hell this should have carried on as long as it did. There’s a reason Paterno is not living today, because if he was alive today, he would clearly be the most hated man in Pennsylvania, if not in sports and society in general. It makes me sick to my stomach and you should feel the same exact way. And now, with enough evidence to convict each and every single one of them and throw the three alive in a Pennsylvania state prison — although it won’t ever change the issue that these victims are traumatized and mentally screwed up in the mind for life — we can hopefully celebrate the demise of these worthless and arrogant enablers. It’s too bad we are criticizing a dead man, speaking ill of the deceased when a report shocked us all after we truly believed in Paterno. It’s too bad we embraced him all these years and heard nothing but good things about him, though he lied and betrayed his longtime supporters. The fact that he’s dead and still talked about publicly, in the aftermath of a scandal that damaged his legacy, is just an explanation of fame and prestige for a man who was just as bad. If he were alive today, Paterno should and would not have any preferential treatment over the other guys, which it would not be a surprise to see him hauled away in cuffs.

He committed a crime and empowered a child molester. How is this OK? How could someone possibly get away with it and not pay the consequences by spending time behind bars?

There was no need for Paterno to testify in front of a grand jury a year ago that he knew nothing about the allegations, when he had knowledge of the sex crimes. According to the Freeh report, after the boy was abused in the shower of the 98 incident, Paterno stopped the school from calling child protective services but said he told his bosses during the grand jury testimony.

The four dirtbags in all of this refused to report Sandusky to law enforcement and Spanier admired and approved of Curley’s email sent at 10:18 p.m. on Feb. 27 2001.

But to continue… with an email sent to Spanier that stated, “This approach is reasonable to me. It requires you to go a step further and means your conversation [with Sandusky] will be all the more difficult, but I admire your willingness to do that and I am supportive. The only downside for us is that if the message isn’t heard and acted upon, then we become vulnerable for not having reported it. But that can be assessed down the road.”

What approach? To conceal the truth and allow a sexual predator to keep abusing children? That’s the approach? The bad thing is, this went unreported and more children were victims of abuse. The bad thing is, no one had morals and raised concern about someone else’s child in the company of a pedophile. These were violations of the Clery Act and Mr. Freeh pointed it out in the report.

“Based on the evidence, the only known, intervening factor between the decision made on February 25, 2001 by Messrs. Spanier, Curley and Schulz to report the incident to the Department of Public Welfare, and then agreeing not to do so on February 27th, was Mr. Paterno’s February 26th conversation with Mr. Curley,” the report stated.

And as Paterno had a close relationship with Sandusky, he knew Sandusky had a bad reputation for child abuse, and when he was asked to tell the truth in front of a grand jury he lied and concealed Sandusky’s dirty secrets. It was about protecting him from criminal charges and an investigation. It wasn’t about the victims struggling to deal with the circumstances of sexual molestation, which gave us a better description of Paterno. This was an absolute disgrace to Penn State athletically and academically, and Paterno refused to handle it making no effort to prevent a “callous and shocking disregard for child victims,” Freeh stated.

This doesn’t seem like a man who had a great influence on men but a bad person, after all. It’s not fair to sugarcoat that he was a positive father-figure to many, touching the lives of young men on and off the football field, but none of it matters as his legacy is called into question and as he lives in the shadows of a sex scandal that will hover over Penn State eternally. The school won’t ever recover from this.

He wasn’t the JoPa we once knew. Behind close doors, obviously, he was a liar and a fraud.

If this is not one of the saddest and most devastating stories I’ve ever written, then I don’t know what is.