A nation shared its proudness and appreciation Sunday. Basketball was MADE IN THE USA, after all. LeBron James, among all players, was the man of red, white and blue, representing the United States with a sense of pride and grace and led the U.S. to back-to-back Olympic gold medals. He, among all players, jumped for joy in celebration near the bench, wearing a widened smile as if he was a kid who opened a brand new Spalding basketball with MJ’s signature on it. As he led the Americans in the gold-medal game, he was entitled to jubilate with his U.S. teammates, he was entitled to laugh and crack jokes with the youngest one on the team Anthony Davis.

The man who is the most polarizing figure is suddenly an American hero for restoring hope in U.S. basketball, for reducing embarrassment of falling from grace in a game we originated, dominated, popularized, and produced NBA’s finest studs to showcase a new era of talented stars. The man who is the most loathed player is suddenly a savior, a humble and unselfish human being. You don’t have to like him, no, but what he’s done for U.S. basketball is beyond incredible — it’s athletic brilliance and staying power. Maybe after he searched for U.S. coach Mike Krzyzewski on the sideline and greeted him with a hug, you perceive him differently. Maybe after he stood on the podium, aglow with pride, fighting back tears as the Star Spangled Banner belted out of the loudspeaker, you have gained more respect for James. Lauded in these games, he wrapped the American flag around his shoulders and sprinted a victory lap around the court, and then celebrated with the guys proudly and happily.

He didn’t just make the country proud — he escaped hatred, anger and antipathy as one of the most recognizable athletes in the world. It marked the first time, since the megalomaniacal spectacle he televised to announce that he would be signing with the Miami Heat, that he’s pleased millions nationwide. It marked the first time, since he departed Cleveland abruptly to outrage most of the town, that he’s beautifully appreciated for an unpaid effort to compete for our country and be honored for healing America’s basketball woes. The dominance of the United States men’s basketball team, mainly because of James’ leadership and humility, has been profoundly alarming and continued in the summer as the team was unbeatable. With James on the U.S. side, the basketball program has risen to the top of the world again, built around NBA stars from a number of franchises that came together and contended against world-class athletes as the game is globalized. You may not love LeBron, but he loves you, willing to sacrifice his vacation months to represent this country in a respectful way. That’s what he did this summer — unselfishly and willingly — and didn’t mind playing for his country. Before they partied in London, with gold medals hanging from their necks, James poured in 19 points, grabbed seven rebounds and had a team-high four assists, all while he was in foul trouble. 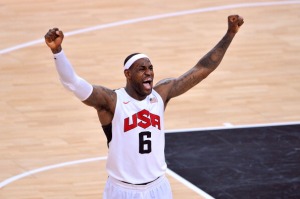 So he finally smiled, breathed a great sigh of relief, realizing he had just done something good for America, where he’s despised and demonized because of jealousy and bitterness. But now, we can only send our thanks and bow to the King after his excellent performances throughout the tournament. There’s no doubt, just no doubt, that James would have been named MVP in the Olympics, if such an honorable award existed. But in America, he’s clearly our Most Valuable Player, the global superstar we are impressed by and call our superhero. For James, the reigning NBA champion after winning his first title for the Miami Heat, he’s the iconic face of American sports, particularly for what he’s accomplished in these Olympics. And by no means were Kobe Bryant and Kevin Durant underachievers in London, as the team almost featured a different star every night.

Durant, meanwhile, scored 30 points and collected nine rebounds while Bryant scored 17 points. This time, respectfully so, the United States needed James in the fourth quarter. As time dwindled down in the final period — like he did last spring for the Heat — he came through when it counted to prove to the world that he’s a clutch performer. He carried Team USA on his shoulders, just as he carried the flag proudly when it all came to an end on the last day of the 2012 Summer Olympics in London, a chance for the players to get to know one another as they came together as respectable teammates. But most of all, even if you hate James, he did this for you, he did this for America, and he did this for me.

It’s about America, not LeBron. The absence of King James could have smudged Team USA’s gold-medal ambitions, but, of course, Krzyzewski lobbied for him to join Team USA and help restore a winning personality internationally. We can make better sense of it, when perhaps James had the best fourth-quarter performance of the afternoon to silence haters and doubters. It looks a lot like James isn’t selfish and egocentric, but a competitor who opted for a change of scenery and seized the opportunity to venture elsewhere for a championship. The chosen one, the man of the fourth performed to hold off Spain late in the closing minutes. James basically rebranded U.S. basketball and repaired his bad-boy image. The nail-biting scare was when James took over, as the Americans coasted to a 107-100 victory.

The Spaniards tried to cut into a lead the U.S. owned, but down the stretch Chris Paul made a couple of baskets that extended the lead. The signature play happened when James drove to the lane for a dunk that gave the U.S. a 99-91 lead and put the icing on the cake. When Spain pulled within six points, LeBron was still playing aggressively, although he had four fouls, and responded by hitting a three-pointer that gave Team USA an eight-point advantage. At age 33, entering his 16th season, Bryant is still the best closer but he isn’t as dominant. There’s the notion that Team USA could have taken home silver, if not for James, as the U.S. beat Spain by 11 points. In today’s game, LeBron is gradually stepping into the closer role in his prime, and four years from now in Rio, he’ll definitely be the star all eyes will be on.

The Americans are back to take back what was theirs at the Summer Olympics with the likes of Bryant, Paul, Durant, Carmelo Anthony, Tyson Chandler, Deron Williams and James Harden, doing it without the presence of Derrick Rose, Dwight Howard and Dwyane Wade.

But it’s about the USA and thanking James.