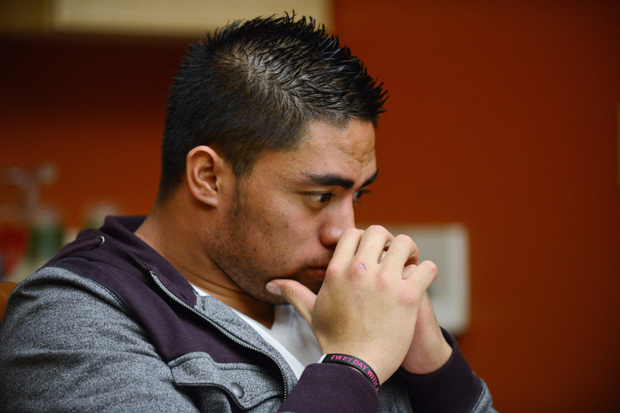 There is something wrong with this picture, so many pieces missing to a story about a man who was either duped or who took part in a bizarre hoax. There is a plethora of holes to this story and Manti Te’o is deemed a liar, be it that he could be the victim of a sophisticated online and telephonic hoax — especially when Ronaiah Tuiasosopo is allegedly behind the girlfriend hoax.

It’s horrendous and humiliating, disgraceful and unnecessary, the weirdest story to ever affect the world of sports — in the age of social media, which could generate a strange conspiracy. The stunning news, breaking in the same week that Lance Armstrong confessed to Oprah Winfrey about his doping, has left folks wondering whether Te’o was a victim or perpetrator, whether he was telling the truth or a lie, whether he was credible or untrustworthy. In many people’s eyes, including my own to be quite honest, he’s a liar and admittedly told ABC’s Katie Couric that he briefly lied to the public about his relationship with Lennay Kekua after learning she never existed. His online girlfriend, Lennay Kekua, was never real but was a fake character. My guess here is, with all the inconsistencies in a strange and twisted saga, that Te’o took part in this hoax. It turns out, as the story continues to get relentlessly more bizarre, that the person on the phone was a man.

What’s next? Will he finally come clean and admit he was the hoaxer? The spotlight, for now, is on the most remarkable college football standout. It’s an ongoing soap opera, a maddening tale, a serious mystery stranger than Stephen Kings’ novels, turning a national sensation into an Internet punch line. The Notre Dame star turned into a storyteller in recent weeks, and happens to be in the middle of one of sports craziest controversies, based on his personal life. The weird thing about it all, upon hearing that his girlfriend had died, is the fact that he only sent white roses to her family and never visited his girlfriend in person.

Why didn’t he visit this so-called girlfriend after she allegedly had a car accident? Why didn’t he visit her when she was allegedly diagnosed with leukemia? Why didn’t he attend her funeral? There was no death notice, no obituary and no announcement of her funeral. So then if Te’o’s girlfriend was imaginary, what else is? He talked to the person, via social media, and stayed in touch for a long time by texting, sending Facebook messages and having phone conversations. As a man, as a guy who doesn’t believe in online dating services, I’d have to see my girlfriend in person, cuddle with her and give her a kiss.

It’s hard to believe anything he tells us.

The most surprising act, however, stunned the world and everybody has been talking about it, and cannot put it to rest. That’s because bits and pieces to this story unfolds each week, as there is never a dull moment. But when he visited Couric for a televised interview to share his side of one the strangest stories, with the controversy surrounding his imaginary girlfriend, he admitted he lied about his nonexistent girlfriend. So what else has he been lying about? In his first on-camera interview since Deadspin broke the news, he told Couric, on an episode of her talk show last week that he “wasn’t as forthcoming about it.” And now, suddenly, he’s willing to talk about it and told Couric he didn’t lie.

It’s almost fascinating that he’s not telling a lie, when he said the two met through his cousin and at a game his sophomore year. I’m not buying that. For one thing, he told Couric during the interview that he reached out to the person on Facebook. For another, he told his father that he and a fictitious character had met once in Hawai’i. It’s also puzzling and troubling to believe him, considering that in her FaceTime chats, her screen appeared black. How come he wasn’t suspicious? How come he never questioned it? How come he didn’t have any doubts?

Sincerely a week ago, according to Te’o unsurprisingly, he said he understands why people might be cynical about their relationship — although he told Couric that his feelings in the relationship were real. He initially wondered if she was real or not, especially when he talked to her online and had not dated in person. And, as online dating goes, you never know who you may be associating with — what to expect from the other end of the computer screen.

“I was just so caught up in the whole thing,” Te’o told Couric during the interview.

Through it all, though, it’s hard to tell whether he’s being honest or telling a straight lie. In defense of his son, Te’o’s father, said his son is just a kid and not a liar. The kid might not be telling it all. The kid might be acting and could be the eventual subject of a book later. And yes, he revealed he had no role in the hoax, but how are we supposed to, as people, believe what he says when it’s a complex story and difficult to solve the puzzle? The core issue here isn’t whether he’s homosexual or straight, which seems too personal and irrelevant. It’s that he’s accountable for a convoluted story that leaves everybody in a state of confusion, as everybody is wondering whether he’s a troublemaker and pulled off a bizarre stunt for attention. A week ago, during an on-camera interview, he insisted that he didn’t help create this Kekua character. Before he talked to Couric about a sickened and uncanny story, he told ESPN reporter Jeremy Schaap in a 2½-hour off-camera interview in Florida, where he was training for the NFL draft that he was never involved.

So was he framed?

You only hope Te’o, a creative writer in a sense, isn’t lying to our faces and has been nothing but truthful, and more importantly, honest with himself. In the end, like anything else for that matter, the truth will surface and we will know if he’s fibbing or not, making us wonder more about deceptiveness and not so much about forthrightness. He’s gullible. He’s naive. And mentally, he’s not all there, I assume — maybe I’m wrong, but that’s what I see in the man. Americans were hoping for an explanation in his first televised interview. So when we heard him speak to Couric in that very same interview, he said he has been ensnared in. That makes one often wonder if this was a publicity stunt that could propel him to Heisman trophy. That makes one often wonder if he fabricated a story with Tuiasosopo to hide his sexuality. He conveniently omitted details during his interview, which shot down much of his credibility, and to this day, folks are still suspicious and unsure what to believe.

“I wasn’t as forthcoming as I should have been, ” Te’o told Couric during that interview.

This is an embarrassment, no question about it. Through it all, throwing intrusive questions out there, tough and hard ones that makes a person reveal the truth if successful, Couric teased us with a homosexual query. That was so distasteful and unacceptable, but she was obviously comfortable throwing it out there. She went as far to ask whether the All-American linebacker was gay.

“Are you gay?” Couric asked during the interview.

On Katie’s nationally syndicated television show, she played tapes of voice messages left by a woman Te’o said he thought was Kekua. The person on the voice mail talked about her first session of chemotherapy. In one of those messages a woman called him out after she said another woman answered the phone. Even now, after learning she wasn’t authentic, he still wants to believe it was a woman. It certainly sounded like one. This particular individual wished him a good night in one of those recordings: “I’ll talk to you tomorrow. I love you so much hon. Sweet dreams.”

There’s not a shred of evidence to go on here, even though one can suspect that he contributed to an everlasting scandal. He’s now become the center of an immeasurable episode that has exhausted everyone to a degree. There’s a sense that he’s untruthful and is fallible. It’s a bit unearthly, although possible, that a 22-year-old woman had a near-death accident and then suddenly was diagnosed with cancer. Through her travails, when the two planned to meet while in San Diego, not once did he visit her in the hospital.

“It was a conversation that I didn’t want to have with my parents,” Te’o told Couric. “To say, ‘Uh Mom, Dad, I missed my flight … because I’m going to see Lennay in the hospital.’ ”

The lamest excuse was, after he was told that — on September 12 — Kekua died, that he was just frightened: “I was just scared and I didn’t know what to do.”

Still, he tends to talk about Kekua as if she’s real. You figure something isn’t right with the Te’o story after a phone call on December 6, from a woman he mistaken for Kekua’s sister. Oddly enough, he remembered that she said it was Lennay, who was his make-believe girlfriend. Eventually, he realized it was all a lie when a Twitter picture was sent to him later that month, with the girl he thought was Kekua, holding a sign with that day’s date. And yet, even though he had his doubts, on the day of the Heisman presentation, he still thought about her and shared that his girlfriend lost her battle with cancer.

Was Te’o the victim of an elaborate hoax, or was he involved in creating humbug?

I don’t know. Maybe he lived a lie.