It’s Tuesday afternoon in New Orleans, and Ray Lewis walks onto the podium. The swarms of reporters and cameramen crowded in front of Lewis’ table, leaving him with no space or breathing room, as the 13-time Pro Bowler was the man of the hour. The man’s word of wisdom and courage is what defines Lewis at best — a 17-year run with the Ravens is the kind of longevity that is not commonplace in the NFL today. In a forgiving country, he’s a leader by example, on and off the field — a consultant to his teammates who come to him for words of advice. His past is forgotten by many, particularly those who portrays him as a role model, and maybe even a Super Bowl hero come Sunday.

He was all laughs and giggles Tuesday at Media Day, but he couldn’t breathe and heard endless questions. While he candidly spoke for an hour at the interview table at the center of the Mercedes-Benz Superdome, he declined to answer questions about his shameful past. He is, without argument, a preacher in shoulder pads and will go down as the greatest middle linebacker of all time, the ultimate maestro and teacher — or a hard-hitting, ball-ripping tackler. There’s not a moment that he’s not hungry — craving Super Bowl triumph — and as an aging star player, he knows Baltimore is one win away from immortality and knows he can ride off into the sunset a winner forever. With that said, he will be trying to depart from the game on top.

As a 37-year-old Lewis sat behind a microphone to address the media for his Media Day appearance of Super Week, it wasn’t long before he backtracked to his troubles of double homicides. The national storyline here, no doubt, is Lewis, a centerpiece of the Ravens defense, but also a man who is portrayed as a showman for all the wrong reasons. Inside the locker room, as you probably know, he’s a wise man who has inspired and fueled his teammates over the years by firing up his guys and even opposing players. Behind close doors, where he gives his pregame speeches, his energy and drive are contiguous. The stools in the locker room are his pulpits and the messages that he preaches makes an individual become a firm believer of a team that has spiritually changed the mood and elevated the heart and soul of a bona fide Ravens team.

There are multiple issues here — from his murder case to his connection to PED use reportedly — but Lewis is bigger than the game. At a time when he’s a fascinating story of Super Bowl XLVII, an athlete we can truly embrace no matter what happened in his wretched past when few still accuses him of double-murder after he was acquitted of the charges, Lewis is the symbol of the Ravens. For a man whose life was once in ruins, a troubled man once tied to the killings of two men outside of an Atlanta nightclub, the soon-to-be retired football star is lustily appreciated by the hometown crowd where he’s brought life back into the sports scene in Baltimore. The Super Bowl is Feb. 3, the day he will perform his signature pre-game dance, a day when he can celebrate on an elevated stage in the middle of the field and watch the confetti fall from the concrete roof. 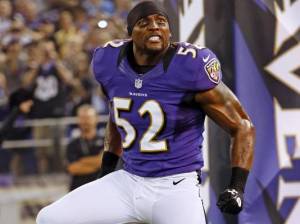 It should come as no surprise that Lewis was bombarded with questions regarding the banned substances, his 13-year-old murder case and his forthcoming retirement. It’s all about his faith now. The point is that he’s not blasphemous but spiritual and spoke about his faith and about his relationship with God. It’s too bad for Lewis that he’s not answering supplement questions and hardly touched on the night that an incident occurred outside of an Atlanta nightclub. Thirteen years ago, a street brawl left two men fatally stabbed but Lewis eventually turned state’s witness against two of his friends, Reginald Oakley and Joseph Sweeting — who were eventually indicted on murder and aggravated assault charges.

He avoided murder to plead guilty to obstruction of justice, and testified at the trial of two of his friends but neither were convicted. It’s not fair to Lewis, and his image in many people’s minds is marked because of these murder charges, including whether or not he’s truly a changed man. He is — at this point — ignoring it and brushing it aside as if he was never there that night and as if none of it happened.

“Nobody here is really qualified to ask those questions,” Lewis said, dodging discussions about the murders. “I just truly feel that this is God’s time, and whatever his time is, you know, let it be his will. Don’t try to please everybody with your words, try to make everybody’s story sound right.

When the gossip spread through New Orleans, and the world entirely, he was embraced openly or either criticized as he’s been lately. He’s become the staple of Super Week, if not the game on Sunday, and could turn his life story into reality TV. While he’s turning to faith and publicity as a way to move on from a tragedy that has affected the nature of the game, thousands aren’t forgiven of his alleged sins and will forever bitterly scorn the Ravens star player. Now, however, no matter what he’s done as a person over the years to pay his debt to society, he’s described as a criminal who is getting away with murder. But the vast majority, however, celebrates a man for his charitable work, for his dominant performances as a stalwart and hard-nosed defender.

The notion that he talked much about God and little about what happened reveals his character and the way he values life while everybody else tries to grasp the sense of what really went down that night of the killings. By now it’s obvious that God is what he values, and by believing and turning things around for the better, he can touch everybody’s heart with his influence and sense of encouragement that have impacted all people, from football to non-football viewers.

“God has always been a part of my life,” said Lewis, who will lead his Ravens into the Super Bowl Sunday. “We’ve always believed in what faith is. And faith is a belief in things unseen. It’s hard to believe or listen to what man says because man can be tricked by words. We all can. Oh, you are too small, you can’t do this, you can’t do that. And then you don’t have too many people to believe in.

On the day he wasn’t too open about the homicide charges and shied away from the topic, like he’s hiding a shred of evidence, his name was tied to a Sports Illustrated report. He’s also, as reports state, linked to banned substances and was allegedly given a product to help heal his torn triceps. Among the most surreal revelations, he has not tested positive and denies using it. As with anything, he dismissed the report when asked about it at Super Bowl media day.

“Two years ago, it was the same report. I wouldn’t give that report or him any of my press. He’s not worthy of that. Next question,” Lewis said.

The person who ratted out Lewis was Mitch Ross, a co-owner of Sports with Alternatives to Steroids (SWATS), telling Sports Illustrated that he spoke to Lewis shortly after the linebacker tore his triceps Oct. 14 and that he requested products that could help speed up his recovery. It’s hard to believe that he used deer-antler spray, which contains a substance, IGF-1, on the NFL’s banned list.

Aside from that, the murder case still echoes for Lewis, and he’s living with it every day of his life. This is a time when he will think about those families of the two victims. The one thing about living in a forgiving country is that Lewis will be revered no matter what, particularly when he’s a sports figure who people tend to worship whether they are guilty or innocent — and because of it — he’s repaired his brand, he’s a first-ballot Hall of Famer and he’s an undisputed leader for his inspiration and devotion to a game that he’s incredibly passionate about.

It’s simple to forgive but hard to forget.

The dramatic finale, of course, might just end nicely against San Francisco on Sunday.