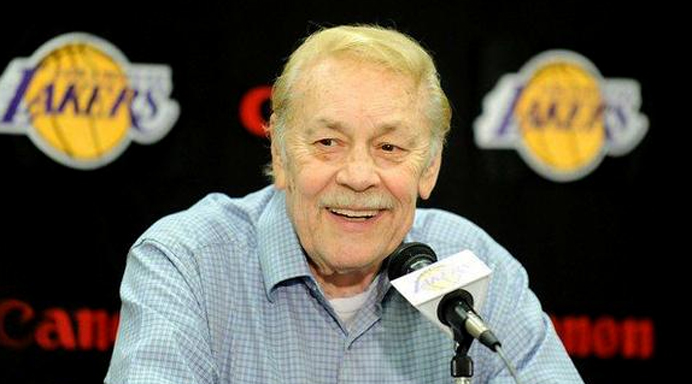 What happened Wednesday night, two days removed from the death of the greatest owner in the history of professional sports, left me touched and in tears. What we saw from folks at Staples Center in Los Angeles, to pay their profound respects to the most successful and influential owner, was an emotional scene so affecting that fans were fighting back tears.

A short video clip was shown on the Staples Center big screen, and then Kobe Bryant sauntered slowly onto the court. He took the microphone, with his face erupting into sadness at the time, as he addressed the crowd followed by a moment of silence for Dr. Jerry Buss, who died on Monday after his long battle with cancer.

As tearful as it was, Bryant shared his thoughts on Buss from half -court and wiped away tears during his emotional speech. As a way to honor the late owner, during a somber moment when the team celebrated Buss’ life and legacy, Bryant pointed toward the spot in which he sat and enjoyed his Lakers win titles.

What can you say about this moment, other than that the Lakers left an empty chair in his suite for a singular, enduring pre game ceremony dedicated to Dr. Buss?

“We are honoring the greatest owner in sports,” Bryant said. “He was a brilliant and incredible owner. He was an even better person with a great heart. We are all, all spoiled by his vision and drive to win year after year after year.” 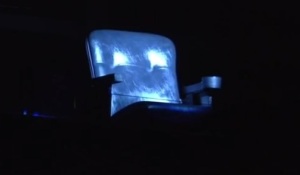 The lights dimmed, for which a spotlight shone on a double suite, a family suite inside the arena where he watched the games with gorgeous women and his entourage. His words from a tape-recording blared out of the speakers through Staples Center to refresh everyone with memories as to what were his plans when he purchased the team back in the late-70s.

The crowd stood and chanted to express its deepest gratitude, for a man who made it all possible for one of the most celebrated and emotional moments at Staples Center. Even sweeter than anything else, the Lakers beat the Boston Celtics 113-99, doing it for JB, who was always raring to beat Boston on the road or at home.

It didn’t matter as long as the Lakers overwhelmed their foes in one of NBA’s biggest rivalries ever, dating back to the Magic Johnson and Larry Bird era, and back to the Wilt Chamberlain and Bill Russell era.

The night was a tribute for a man who created the most entertaining team, an undaunted mastermind who was behind Showtime and made splashes by signing flashy and marquee players, bringing the franchise to life and spoiling a fan base that hates failure.

It is his legacy, of course, that will forever live on and own a special place in the hearts of Jeanie and Jim Buss, who have both been molded by their father to run a basketball business.

There will be folks talking and reminiscing about the good times with Buss for years to come, from the time he bought the Lakers in 1979 to the time he passed away, leaving behind the biggest show in sports history, one that will hopefully remain in the hands of the Buss family.

The man smiling down and winking his eye from heaven, the man with a smooth toupee and a perfectly trimmed mustache, which were his trademark, will fully be appreciated for the memories he forged, renewing hope year after year and producing an aura of greatness in the entertainment capital of the world.

Jeanie shared sentiment with actress Dyan Cannon before tip off, a few rows behind the court, smiling and holding back tears as she mourned.

The night was about saying farewell to the creator of Showtime, an owner who built an empire in Los Angeles and presided over 10 Lakers championships as a shrewd businessman because of his business acumen and basketball genius that defined a true winner.

Flags were flown at half-mast at the LA Live plaza across from Staples Center, and a wall was erected as fans adorn it by leaving thoughts and memories. The team also wore a JB patch, bearing Buss’ initials.

It was fitting that the Lakers hosted the Celtics, a matchup Buss often looked forward to witnessing and taking joy in, especially when the Lakers beat their arch rivals.

It was more than just a game, but also a moment to remember a dedicated and fervid showman, the pioneer of one of the most decorated NBA franchises ever, spending millions to form the nucleus of one of the more talented teams and bond with the smartest minds in the game that turned the Lakers into a million-dollar business brand.

It was perfect to listen to Bryant’s eloquent words about the time when Buss met with the Black Mamba, spoke to him about giving the keys to him and then traded Shaquille O’Neal, the most dominant center in the game’s history.

What a man he has become, stepping into his role as not only a clutch performer, but also a team leader, as he was able to earn Buss’ trust and be named team captain after helping the Lakers win five NBA championships in 17 years.

This was a rare moment for sure, a time in Bryant’s life when he delivered his thoughts about a man who handed him the reins, and to this day, he credits his longtime friend for talking him into staying with the Lakers. Bryant, who had 16 points on 5-for-15 shooting, was honored to speak about Dr. Buss, but was emotionally shaken while breaking into a smile slightly by the time it was all over.

If my assertion is true, which I hope, the Lakers can ride a winning-streak in the upcoming weeks, following LA’s most dominant effort this season: an incredibly remarkable, statement-made, limited-turnover performance. Playing with heavy hearts, the Lakers, for the first time all season, were strong-willed and aggressive, jumping out to a fast start that propelled them to a heartwarming victory.

For all the uncertainty and trade rumors that surrounded Dwight Howard, who had 24 points and 12 rebounds to earn back his self-proclaimed “Superman” nickname, Lakers general manager Mitch Kupchak told reporters that he would not trade the center before Thursday’s trade deadline, and they stuck to that word.

This commitment to Howard might not be such a bad suggestion, after all, not when he finally played like the most dominant center, after failures for much of the season raised doubts.

He’s making a stride toward silencing the critics and naysayers, and has suddenly come alive to give the Lakers what they’ve expected from the beginning of the season.

It was likely to see this performance, coming from a team playing with heavy hearts and motivated by Buss’ loss. It was also payback for the 116-95 blowout to the Celtics two weeks ago in Boston, realizing the magnitude of these games down the stretch, as Los Angeles is only 3½ games behind Houston for the final Western Conference playoff spot.

He was very impressive, but needs to give his best effort every night, following his best game as a Laker. The best part about Howard, as he brought his game, was that he set screens for Lakers point guard Steve Nash.

That allowed Nash to make 6 of 7 shots and score 14 points, while he had seven assists to surpass Magic Johnson for sole possession of fourth place on the NBA’s all-time assists list (10,144).

Win or lose, Buss was close to his players and pampered them as if they were his own children. But he wasn’t too fond of losing, which is all the more reason he spent money, brought in the necessities to win championships and formed a dynasty that was unmatched to most NBA franchises.

Bryant and Pau Gasol had a close bond that was just as special as Johnson’s with his friend and owner, a man who was a visionary and mentor.

Mike D’Antoni, Lakers head coach, wasn’t around long enough to build a strong relationship with Buss, and when the Showtime Lakers were the dominant ones in the 80s, he was playing in Italy. But when no one else gave D’Antoni an opportunity, the Buss family was willing to welcome him to LA with open arms, after parting ways with a disappointing Mike Brown.

And mostly, winning was imperative to Buss. He didn’t care how it worked, as long as it did.

The Lakers won it for Jerry Buss.