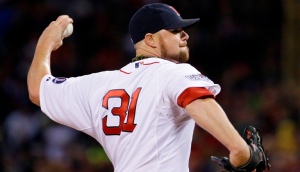 This was baseball at its finest. It was an awesome, feel-good spectacle, on a night that two of the top pitchers in baseball shined brightly in the spotlight for a couple of teams that are so closely matched. It was an instant classic, particularly when Adam Wainwright and Jon Lester dueled in Game 5 in what was a masterful outing for these two pitchers.

The Boston Red Sox know how to savor moments like these, even after so many miserable moments like a year ago. With one more victory, they will clinch the World Series title in Fenway Park for the first time since the Woodrow Wilson administration. If this happens, one can assume the Red Sox will throw a big party at Fenway Park, and fans in Dunkin Donut Nation will celebrate in the streets.

This was a masterpiece, a defining moment for Lester. It was nothing short of incredible, as many, including those in the minority, acknowledged Lester’s evening at Busch Stadium as the Red Sox moved within one win of a World Series title with a 3-1 victory in Game 5.

The irony is that he’s now an October hero, after winning all three of his career series starts and allowing just one run in 21 innings. Lester’s postseason performance is exemplary, and certainly he’s an unflappable ace, holding St. Louis to one run and four hits in 7⅔ innings, while striking out seven in Monday night’s game.

The big-game pitcher, the resurgent lefty was dominant and silenced the Cardinals’ bats in his magnificent outings during the postseason. He was incredible, attacking the strike zone, executing his pitches and throwing harder and commanding his fastball. Last offseason, he was mentioned in trade talks as he was struggling and allowing runs to score. There was much debate as to whether or not the Red Sox should have dealt Lester to Kansas City for Wil Myers, who ended up going to Tampa Bay where he has emerged into a promising star.

Lester doesn’t stop believing, and he was confident that he’d be his dominant self again. That’s what was missing for Lester. Even though he was performing poorly, he’s been able to regain the dominance he achieved early in his career — and, more importantly, his mechanics improved, and, amazingly, he was producing results that changed the dynamics in the Red Sox pitching department.

Because of his playoff performances he is the growing legend of October. In three World Series starts, he is now 3-0 with a 0.43 ERA. Lester is 4-1 with a 1.56 ERA and 0.95 WHIP in five starts this postseason. He is one hell of a pitcher, has been his entire career — despite his struggles at times — and he is emerging before our very eyes. His sixth career postseason win ties Curt Schilling and Pedro Martinez for the most in team history. In these moments, he has been lights out and pitched a gem against the Cardinals in Games 1 and 5.

It was exquisite pitching, and it’s the kind of masterful effort that Lester didn’t have during an eight-start stretch from May 20 to June 27 when he was not delivering consistently controlled pitches. In that span, he went 2-4 with a 6.99 ERA, 61 hits allowed in 47⅔ innings and nine home runs allowed. But while he was pitching like someone who belonged in Double-A, Farrell and Lester’s teammates believed he was capable of playing an integral role in these playoffs. Before the All-Star break, opponents hit .316 off him and he wasn’t one of the elites. He’s enjoying himself because he can pitch, and he knows it. 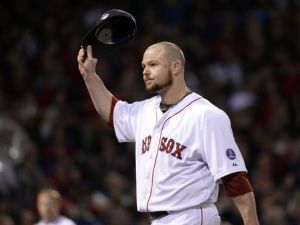 He’s a Boston hero, a pitcher who has been different since the All-Star break. So now, with all the drama and crazy turns in this series, the Red Sox are 3-1 winners. They can be crowned 2013 World Series champions on Wednesday night, with a chance to spray champagne bottles and celebrate in the friendly confines of Fenway Park. Everything, from the way he pitches, to the way he conducts himself on the mound, is an understatement with the way he has performed all postseason long. This shows how he is the game’s best on baseball’s biggest stage. The turnaround has been incredible, and during an improbable run, Lester suffered through the worst season of his career, going 9-14 with a 4.82 ERA and yielding a career-high 25 home runs.

The Red Sox knew, even back then, that he was likely dealing with a mid-life crisis, but now he is just as tough as his teammates. There was a time, two years ago, when Lester was one of the faces of the team’s collapse in 2011, accused of drinking beer, eating fast-food fried chicken and playing video games in the clubhouse. This season, he’s finally making strides, and only had a couple of miscues all night in Game 5.

There were times when Lester was in trouble, particularly when he left a fastball out over the plate as Matt Holliday launched a 1-0 pitch into the center-field seats to tie the game in the fourth — the first run he had allowed in a World Series game, with a nice stretch of 16⅔ innings of scoreless starts before Holliday hit the long ball. But afterwards, he retired 12 Cardinals in a row, firing a crisp fastball and displaying his changeup. The rest of the night Lester outdueled Wainwright, who allowed three runs and eight hits with 10 strikeouts. It was a tight, tense contest, but Boston broke a 1-1 tie in the seventh when David Ross laced a ground-rule double to left that scored Xander Bogaerts.

Red Sox outfielder, Jacoby Ellsbury, who entered Game 5 against the Cardinals 3 for 16 in the World Series with no RBIs, poked a single to center off Wainwright that scored Stephen Drew. And as he rounded the bases, Ellsbury pumped his fist, after delivering an insurance run in this series. But Ross was tagged out at home by center fielder Shane Robinson on the play.

It was a nice night for David Freese, who had a one-out double in the eighth to end Lester’s pitching excellence. Shortly after, Farrell called to the bullpen for closer Koji Uehara, who went to work and struck out Matt Adams to end the eighth. In the ninth, Uehara still was unhittable as expected and shut it down.

And though Lester was battling a back injury, he was virtually impossible to hit when he was showing laser-like focus. It’s a good feeling to see Lester reassert himself with an astounding second half. Turns out his two brilliant starts of the World Series earned him praise as one of the top big-game pitchers of this era. It certainly doesn’t seem like Lester has been bothered by tightness in his back, because he was terrific and had been on top of his game. Look, he’s been here before, he’s been thrust into this situation before. That was the year he closed out Game 4 of World Series, when the Red Sox swept the Rockies in 2007.

But this was the biggest start of his career, and he has shown that he is Boston’s ace.

Boston will travel home satisfied, largely because he brought the Red Sox within a win of the championship.