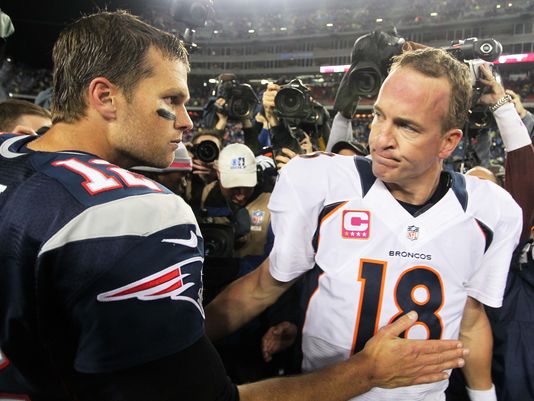 So now, there is a growing American sports rivalry. I’m all for Brady Bunch vs. Peyton Place — mostly because it’s one of the greatest personal rivalries in sports. Years from now, we’ll reminisce about a classic rivalry in sports that will last for decades, if not centuries. This is one of the best rivalries that will live on forever, notably similar to Bird-Magic, Nicklaus-Palmer, Ali-Frazier, Martina-Chrissie, Wilt-Russell and Petty-Yarborough.

So what’s not to love about Tom Brady vs. Peyton Manning? It’s a game that features a playoff clash of two legendary quarterbacks, and a rivalry that continues to grow in stature every time Brady and Manning meets for a showdown of epic proportions. There’s a sense that no game is bigger than Sunday’s AFC championship matchup. This is the league’s greatest QB duel, the most intense of all sports rivalries, and though 49ers vs. Seahawks is the ferocious rivalry, Patriots vs. Broncos is just as intriguing and fun to watch. This is merely one of the latest one-on-one sports rivalries in football — or in all of sports.

A game of this magnitude is only fitting for America’s preeminent professional sports league. The veteran gunslingers have become must-see TV, and though the rhetoric often ignores the notion that this is pro football’s friendliest rivalry between two QB greats, it is still defined as pro football’s heavyweight fight. If that’s not enough, these two quarterbacks have great respect for each other, and even though they’ve squared off 14 times throughout their careers, they’ve never challenged each other’s strengths or each other’s will.

As these men embark on their quest, with a chance to advance to the Super Bowl two weeks from now, Manning is often disparage because of Brady’s victories, passer rating and postseason history. The rivalry feels like more of an obligation or just another game on the schedule. There’s not much to dislike about Manning and the Broncos. There is, meanwhile, much to hate about Brady and the Patriots. They’re not just Spygate criminals, they’re America’s public enemy. While we’re at it, Brady is a pompous jerk at best and is reprimanded by haters because of his arrogance and ego.

At age 36, when he’s compared to Joe Montana, he’s considered to be an underdog against Manning and the Broncos. He is a rare breed of quarterbacks, one of the few athletes who can orchestrate a game-winning drive late in the fourth quarter. We realize he’s been the centerpiece ever since the Patriots’ Super Bowl run last decade, and are cognizant that he’ll have a chance to win a fourth Super Bowl ring, which would tie him with Joe Montana and Terry Bradshaw for most titles among quarterbacks. For a bonus, Brady married a supermodel and his wife, Gisele Bundchen, and has a moat around his $20 million-dollar mansion.

If Brady loses, it would cripple not only his team’s fortune but his legacy as he has not won a Super Bowl since beating the Eagles after the 2004 season. In contrast Manning, who can move to within one victory of becoming a two-time Super Bowl winner, is classy and animated. He is, without much debate, football’s beloved icon, the funniest spokesperson for TV commercials, the owner of four MVP awards and the holder of NFL single-season records for passing yards and touchdowns.

If he loses, Manning again falls short and might contemplate, at age 37, a retirement date, particularly if the results on an exam during the offseason on his surgically repaired neck is less than stable. So they meet again, and Manning now gets a chance to guide the Broncos to the Super Bowl. With a win, he would become the first quarterback to lead two different franchises to the Super Bowl.

If he goes on to win, Manning would become the fourth quarterback in the Super Bowl era to lead the NFL in passing yards and touchdowns and also make it to the Super Bowl in the same season. So they will meet for the 15th time with Brady holding a 10-4 edge in the head-to-head matchup, including 2-1 in the playoffs. They split their two previous AFC Championship meetings with a win by Manning during the 2006 playoffs and Brady won in January 2004.

Now this is Round 15 in Denver. The most fascinating aspect of the Brady-Manning rivalry has been how both of these quarterbacks are evenly matched. By late Sunday evening, only one of them can be winners. Just as impressive is what he’s done in 14 years in New England, owning a 13-4 record this season and getting to the AFC title game with limited talent as the Patriots are plagued by injuries. It’s hard to imagine the favored Broncos, Manning’s squad, falling to Brady’s Patriots when Denver has a deep core of receivers, which helps and makes life easier for the 16-year veteran.

But come Sunday, when a trip to Super Bowl XLVIII at MetLife Stadium is on the line, we’ll see one of these quarterbacks validate their legacy on the national stage. It’s fair to say these quarterbacks are the driving force of a billion-dollar sports league and the biggest names in pro football. For one, they play the toughest and most important position in teams sports. For another, they are surrounded by the hype, unable to breathe and avoid the publicity, all while they are making millions and roughly are considered the best quarterbacks in today’s game.

Manning has remarkable career passing and touchdown numbers, but those are nothing compared to Brady. He’s won more playoff games and two Super Bowl trophies. In the meantime, Manning only has one trophy, less conference championship games and a lone Super Bowl appearance, unlike Brady, who has been to many Super Bowls and AFC title games. The biggest indicator of success in his career has been his 51 game-winning drives, which are tied with Dan Marino for the most in a career.

At the moment, Brady has the most game-winning drives in the playoffs — seven in the postseason and three in the Super Bowl. For Brady, he’s nearing the twilight of his career. In recent memory, he’s failed to lead the Patriots in the Super Bowl, falling short twice of the ultimate goal when Manning’s brother, Eli, broke his heart. With a spate of injuries and Aaron Hernandez’s murder case, the Patriots weren’t even supposed to make a deep playoff run. The reality is that it’s a bit of surprise that the Patriots have reached the title game. It doesn’t matter how, but amazingly New England coach Bill Belichick and Brady figured out a way.

But in all, it’s about these two quarterbacks. For all of their greatness, they are among the top five quarterbacks of all time. In the sports world, they are mentally strong and mentally tough. Sunday’s game should be something to see for sure. They both have a chance to prove, once and for all, that they are the elite ones.

We’ll have to wait and see.