Now come the questions on whether Steve Alford, in his first season as UCLA head basketball coach, can lead his young and inexperienced team deep into March. He’s been essential to the Bruins’ resurgence and, as usual, was exceptional during the regular season, bringing energy and changing the mentality of his players since he took over at UCLA. He’s been instrumental to the Bruins’ success, instilling a positive sense of direction in his players and leading the kids to a Pac-12 title.

There’s more to the story of a man who has a reputation for failures and early tournament exits, but as we all know, Alford is hoping to turn it around. He hasn’t advanced past the first weekend of the tournament since 1999, when he led No. 12 Southwest Missouri State in his first and only trip to the second weekend. Not too long ago, Alford left New Mexico for UCLA after agreeing to a 10-year contract extension with the school.

Last year, after his New Mexico team dominated the regular season, he failed to survive the first weekend of the tournament. This year, he has a chance to finally advance to the Sweet 16, but he has had disastrous tournament runs to his coaching career. He’s not remembered for winning at least a share of the Mountain West regular-season title four times at New Mexico. He’s remembered for merely one Sweet 16 appearance in seven tries as a head coach. His teams have qualified for postseason tournaments 18 times, including seven NCAA tournament appearances. He led his former teams to the postseason in 12 of the last 13 seasons, finishing with at least 20 wins in 11 of his 18 years.

Oftentimes, Alford’s former teams lost in the first round. There’s no guarantee the Bruins will reach the Final Four, but there’s a possibility Alford can finally dance. What is a sure thing, without a doubt, is that he has made UCLA nationally relevant again, the school known for its basketball success.

After the gut-wrenching, disgusting losses in the first or second round, UCLA fans can only hope history doesn’t repeat itself and impede the program’s success. The previous season before he made his presence felt at UCLA, No. 14 Harvard upset his third-seeded New Mexico team in the first round. The 49-year-old Alford can erase a lot of bad postseason memories Friday night when the Bruins face No. 13 Tulsa in their tournament-opener.

Sure he has failed miserably in the tournament as a head coach, and with a loss in the first round at UCLA, especially at a prestigious basketball program that is used to making deep tournament runs, it would be somewhat unacceptable. His predecessor, Ben Howland, made seven NCAA tournaments in 10 seasons with the Bruins, and was eliminated in the first round twice. Unlike Alford, he has led the Bruins to three Final Four appearances, but never won a national championship, falling short to the Florida Gators in the title game in 2006.

Steve Lavin was the Bruins head coach long before Howland arrived, and was dispatched only once in the first round. He was only one win away from the Final Four in his first season as UCLA head coach in 1997. The Bruins were one of just six schools to dance to the Sweet 16 in both ’97 and ’98, during his tenure.

So now, it is Alford’s turn to show he’s worthy of coaching in a major conference with a roster capable of reaching the Final Four. That’s kind of how the folks in Westwood feel about this UCLA team and, without a doubt in our minds, Alford can make the case that he’s the right coach for the Bruins with a couple of victories this weekend.

This is a potential upset here in the first round, but the Bruins are fortunate to have Kyle Anderson, a 6-foot-9 guard who is the team’s leading scorer, and the 6-foot-9 forward, Tony Parker, can knock down 15-foot shots, dictate the tempo and dominate the paint. It’s much different this season with Alford as head coach, and no disrespect to Howland. 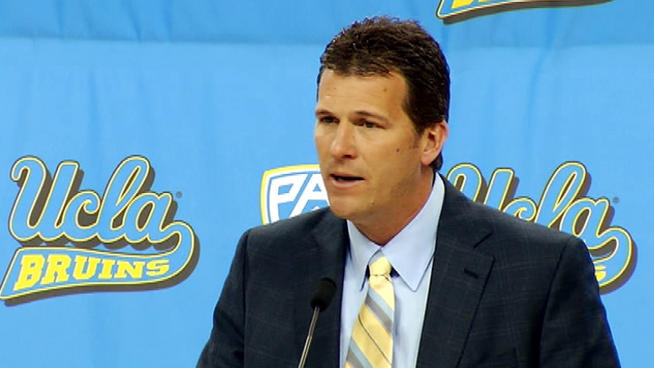 The basketball program needed a new voice, a new face and new creative ways, and it could turn out that Alford is the guy for this Bruins program moving forward. He’s a winner, an ex-Indiana star who was the team’s leading scorer and led the Hoosiers to a national championship in 1987. Now that he’s long past those days, he accepted one of the toughest jobs in college hoops, willing to hopefully lead the Bruins to another Final Four and a national title, maybe not this season but at least a few times during his tenure.

This is a fresh start, a new spring, a new season, and with a pair of victories over the weekend, it won’t look bad on Alford’s resume. What a victory would mean for Bruins fans in the opener is a sense of hope and belief. What this means for Bruins fans, if the team survives the first weekend, is that Alford is the guy for the Bruins program. A trip to the Sweet 16 in nearly two decades for Alford is a way to meet those standards of excellence at UCLA. There’s every reason, of course, to believe Alford will one day be an elite college basketball coach before it is all said and done.

It was only a year ago that Tubby Smith and Minnesota pummeled UCLA in the first round, which led to Howland’s firing. When you win, you gain respect and become an admirable coach for a program that was knocked out of the first round by the Golden Hurricane 20 years ago. So now, it is perfect timing for Alford and the fourth-seeded Bruins to beat Tulsa.

This weekend, Alford is on a mission to escape the first-round woes and finally launch himself and the Bruins into prime contention. He knows what it takes to win, having played for a national title team and having enjoyed more success. It must be tough to follow in the footsteps of John Wooden or even Lavin and Howland, considering how much these coaches mastered during their eras of coaching one of the winningest programs in college basketball.

This is just the beginning to what could be an epic ending to a superlative coaching career.