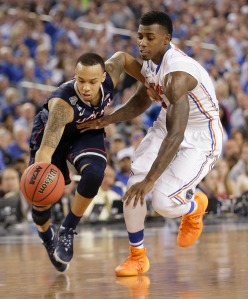 This wasn’t a fluke. It was a legitimate victory, an outstanding showing for the UConn Huskies in a stadium that was transformed into a madhouse. It’s pretty simple why UConn upset Florida 63-53 in the Final Four to reach the national championship game on Monday night.

Much of the UConn’s offense came from DeAndre Daniels, the Los Angeles native who had 20 points, 10 rebounds and went 2 for 5 on 3-pointers. He buried every shot when he squared up to launch, with baseline jumpers and 3-pointers while Florida’s backcourt diminished and couldn’t match up to the guard play of UConn. The Huskies, the No. 7 seed in this tournament and the most unappreciated team in the nation, will await the winner of Kentucky vs. Wisconsin.

For much of the night, UConn guards locked down Florida’s dangerous backcourt, and the Gators’ offense was stagnant and fragile. This year, many expected Florida to own college basketball, but now it won’t happen — not after SEC Player of the Year, Scottie Wilbekin had his worst offensive game of the season, and not after shooting guard Michael Frazier III had a horrid offensive game.

It was such a horrifying game, about the only thing Florida seemed to do perfectly was force turnovers, and the Huskies committed 13 turnovers, while the Gators turned it over 11 times. Florida’s guards clearly weren’t enough to beat UConn’s guards, who have been a defensive juggernaut in the NCAA tournament. Wilbekin and Frazier uncharacteristically struggled in the Final Four, when much was at stake, putting a damper on the Gators’ dominant season.

But as hot as the Huskies have looked for three games now, it appears nobody is talking about how good they’ve been in the 2014 NCAA tournament. There’s nothing fluky about UConn beating the Gators twice this season as Wilbekin was 0-for-5 shooting when Huskies guard Ryan Boatright completely pestered and disrupted him. This ride to the title game unexpectedly came for a team with undeniably the best defensive guards in the tournament — a bunch of blood-thirsty players who made Wilbekin’s night miserable.

Daring him to make his shots, Boatright kept Wilbekin out of the lane and forced him to take shots. He had the ball taken by Shabazz Napier three times He dribbled too much, and was selfish with the ball on several possessions when he could have made plays after he’s improved progressively at getting his teammates involved. The hype had been building around Wilbekin, and Florida’s backcourt was unstoppable for much of the season. But now, the hype is building around UConn’s backcourt with the emergence of Napier and Boatright. The night started tardily for UConn with the Gators jumping out to a quick start.

The Huskies controlled much of the second half and the game ended with UConn fans screaming loudly as the players celebrated together. These UConn players have turned it up a notch in March and now in April. Kevin Ollie continues to do an exceptional job as a head coach, stabilizing the luster to one of the nation’s most successful programs. They know everyone ignored the fact the Huskies beat the Gators 65-64 Dec 2. They know people wrote off their fierce defense. They are relentless and were not intimidated by Florida’s electric offense. UConn gets plenty of credit here. The Huskies held Florida to 53 points, which tied a season low.

If it weren’t for guards Boatright and Napier, a dynamic scorer who was the best player on the floor Saturday afternoon, the Huskies wouldn’t be playing in the title game. This is a team of great resilience and poise, and UConn appears to be completely unbeatable whomever it plays. The night will be remembered for Daniels. You’ve never talked about him. If you’ve never heard of him, you know now who he is and you are probably talking about him. 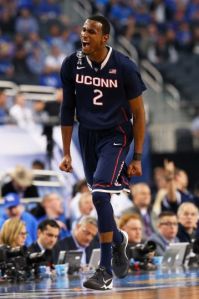 Daniels made a 3-pointer, and from there UConn took off with a comfortable lead. He scored the last of his 10 first-half points on a jumper for a 25-22 lead at the half, and the Huskies never trailed for the rest of the night. Napier was not, by the way, stopped by the Gators. He had his way against Florida, and hit a 3-pointer to give UConn a nine-point lead late in the second half. His teammate, Boatright, scored on a layup and gave the Huskies their first double-digit lead.

They stepped it up defensively and destroyed the Gators the rest of the way. It was so bad, Wilbekin finished with four points on 2-for-9 shooting and had three turnovers and only one assist. That will happen when an opposing guard can take away one’s ability to score, and that’s certainly what Boatright and the rest of the UConn guards did to Wilbekin. He couldn’t slash to the basket and hit shots, only settling for one 3-pointer from the corner early in the first half and failed to score since.

And, of course, when UConn tightened up on defense, he never got a good look at the basket. I wonder why people were so surprised to see the Huskies stultify Florida’s offense and keep the Gators contained when UConn swallowed up Michigan State’s guards. It seemed implausible, to say the least, that Florida would spark a late comeback when center Patric Young was getting it done under the basket. But it wasn’t enough to come from behind to break many hearts as the No. 1 defensive team in the nation was denied by an underrated defensive unit, just as good as the Gators maybe even better.

It might well be true that UConn is this year’s most dangerous team in the nation. With a strong finish, the Huskies made 11 of its last 12 shots, driving inside to get easy buckets against Florida’s man-to-man defense. The Huskies offensively had enough to put the finishing touches on a game that validated much for this UConn team. Napier had 20 points and 10 rebounds on the night as the Huskies shot 55.8 percent in the game — 63.6 percent in the second half.

They beat a very good Florida team and have a backcourt that can take over a game. So this is no fluke.