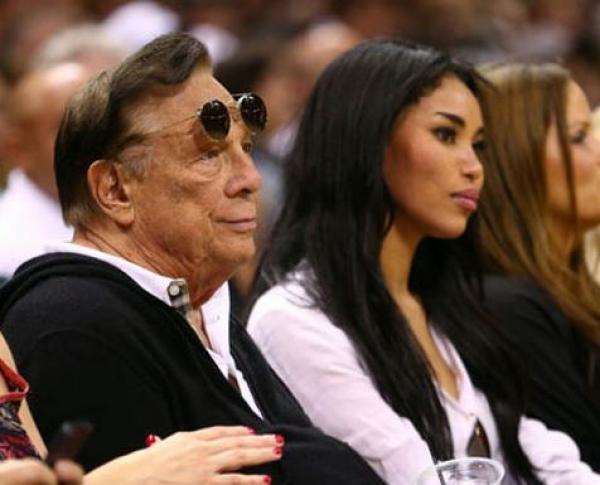 According to a TMZ audiotape, Donald Sterling doesn’t want his girlfriend to bring African-Americans to games and wanted her to delete an Instagram photo she posted in which she posed with the Los Angeles Lakers Hall of Famer, Magic Johnson.

Hardly does this writer ever like to call anyone a racist, but after he was allegedly caught on tape in the middle of an argument with his girlfriend, V. Stiviano—who is black and Mexican—my belief is that he has some serious issues against African-Americans.

If anyone is more polarizing in this town, if anyone is hated more and harshly criticized in Los Angeles, it’s not the beloved Lakers inept owner Jim Buss but it is Sterling, a man who has had a long reputation for racism.

It should come as no surprise that he feels this way about African-Americans, though he accepts blacks only as entertainers and simply for their talents, when he really can’t stand blacks. What we know about Sterling is what we know about him today. He has an issue with minorities, particularly black folks.

Whether Sterling is ignorant or never has anything nice to say, he’s a guy who obviously doesn’t respect himself, living a miserable life and showing hatred towards a particular ethic background. He does more than just talk. He has had a history of uttering racial slurs, speaks ill of those who are minorities and hides his racism, as he proved in this shameful audio obtained by TMZ.

It’s a shame that the billionaire real estate mogul has not kept his mouth shut since he settled a lawsuit confidently in 2005 that accused him of discriminating against black and Hispanic tenants at properties he owned. It’s a shame that Sterling has never changed for the better after ex-general manager Elgin Baylor filed a wrongful termination lawsuit against the Clippers.

What is despicable, based on his discriminatory actions in the past, is that Sterling is a phony and a loser who profits from minorities.

For Sterling, you can be on his team if you’re African-American, but you’ll never be his friend or even liked by him.

If you are black and going to play for him, then you should know it’s strictly about business, but what African-American man would want to play for Sterling, especially after hearing these comments he made about not only a retired NBA star but people of color?
And this writer believes that he is talking about all African-Americans, not just a few, and he ought to be ashamed of himself.

If I was a Clippers fan—and thankfully I am not—I would never attend another game, I would never invest or waste my money on the Clippers. The truth is, he’s all about pocketing millions and all about being entertained by a team full of African-American ballplayers.

With a roster of African-American players, the Clippers are playing in the month of April, usually a time of the year when Sterling is sitting on his couch at home waiting for June, so he can see who he’ll draft for his perennially lowly and second-rate franchise.

This year, because of those African-American players, the second L.A. franchise has a chance to make a deep playoff run, thanks in large part to head coach Doc Rivers, point guard Chris Paul, forward Blake Griffin and center DeAndre Jordan.

It’s quite fascinating that he says he doesn’t want blacks to show up to his game when his coach and players are African-Americans.

His discriminatory rant has since outraged people in Los Angeles, including NBA legend Magic Johnson, who vowed never to attend another Clippers game as long as Sterling is the owner. No matter how good things are going for the Clippers, supporters have quickly turned against him, I’m sure.

No owner has been more embarrassed and humiliated than Sterling, notoriously known for these sort of callous, racist, hate-filled remarks, which have by now angered those who jumped to his defense and who wanted to believe he never was a bigot.

It is no secret he is more of a buffoon among L.A. sports team owners – Sterling ranks up there, and could win an award for league’s dumbest person. More times than not, whether his franchise produces or finishes a disappointing season, he spews from his mouth – perfectly becoming the laughingstock.

Win or lose, the Clippers are usually ridiculed and laughed at for poorly running a losing team or for either Sterling’s big mouth that seems to get him in more and more trouble.

It is a farce that only now reveals the true side about a man who strongly hates minorities, lashing out at his girlfriend for associating herself with black people in a bigoted, disgusting 10-minute taped conversation. The whole world can hear it, courtesy of TMZ Sports, which broke the story late Friday night.

The Clippers players held a team meeting to discuss Sterling’s racist views, according to a source, but it won’t change much. He certainly can’t take back his words or undo what has been done in the past. On Saturday afternoon, while few may have forgiven him and won’t forget what he said after listening to the tape, he publicly apologized for his blatantly racist remarks.

In America, issues of race are inevitable, as ignorance won’t ever end.

In America, Sterling is one of those notorious bigots who constantly make himself look like a fool that he is. It’s hard to imagine the Clippers taking the floor Sunday against the Warriors in Game 4 of their Western Conference playoffs.

Today, we are laughing at Sterling, while we feel sorry for Rivers, who has made his home here in L.A. to coach Sterling’s team.

Today, we are criticizing Sterling, while we urge Clippers players to not play another second for the man, to not give all their effort for an owner who doesn’t like them or have no desire associating himself with African-Americans. It would be a way to send a message to Sterling, since Paul, Griffin, Jordan and the rest of his players are only good enough to play for him but not good enough to have dinner with him.

The league needs to take action against Sterling, and force him to sell the team, because enough is enough.

It amazes me—and other fans—that Sterling’s girlfriend is half African-American and owns a team in a predominantly black league. There is no better time to realize that his players have lost respect for him, feeling betrayed and infuriated.

It’s a shame these players are playing for a racist, while having a remarkable run of playoff success. This couldn’t have happened at the worst possible time, but now everybody knows how Sterling feels about the Clippers.

It’s time to boycott the rest of the playoffs until Sterling walks away or the NBA strips him of the franchise entirely.